There’s usually two camps in the motorcycle world as far as safety goes – those who gear up and those who purposefully don’t wear protective gear for the experience of feeling more free when they ride. Call it vainglory or ignorant, but this free-rider fashion statement does very little for people’s safety.

Harley-Davidson driver Brahm Bechtold recently told the Littleton Independent that the brand of motorcycle he rides was designed for slow cruising and taking it all in.1

“The wind’s in your hair, you’re having fun and just kind of putting along. It’s nothing fast, no tight turns, it’s a lot slower, just enjoying the scenery,” said Bechtold, a Lone Tree resident, during a recent interview with the Littleton Independent. “I’m not looking to cut those corners or do that high acceleration.” 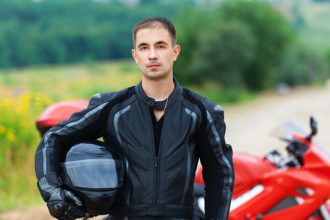 Those who don’t wear helmets while motorcycle riding say it’s their personal freedom to choose between wearing a helmet and not wearing one. Even Bechtold admits he’d probably be safer if he wore a helmet.

“You should definitely wear a helmet, but I don’t,” he said. “It’s my personal choice.”

There’s plenty of good reason to still wear a helmet according to the Colorado Department of Transportation (CDOT), even if it’s not required by law:

The Importance of Wearing Protective Gear

Helmets and even leather gloves and jackets can make a significant difference for motorcycle riders, according to the Insurance Institute for Highway Safety (IIHS).

“It’s riskier to be on two wheels than on four,” said Russ Rader, spokesperson for IIHS. “Wearing a helmet is the single most important thing a rider can do to reduce their risk of serious head injury or death in a crash. Helmets are very effective in preventing death.”

Motorcycle gear is expensive, but your life is worth it. Experts say, if you plan to pay $5,000 for a motorcycle, then plan on budgeting at least $1,200 to $1,500 for your protective gear. Here’s a list of ideal motorcycle protection gear:

Even the world fastest motorcycle racists don’t ride without protective gear. Take Marc Marquez, who won the 2015 World Champion MotoGP race. Marquez recently walked away from a 209.9 m.p.h. crash without even a scratch on him thanks to his gear.2

“In the last big crash, I was only going maybe 35 or 40mph — still faster than the human body evolved to handle — and was wearing all the gear with the exception of proper riding pants. Know what happened? I lost a good chunk of my butt to road rash, tore a previously-installed titanium plate out of my forearm, two ribs popped out of my chest, I fractured my coccyx and put a two-inch hole through my knee. The total medical bill was around $40,000. Better gear and a more complete outfit would likely have helped me avoid being injured whatsoever.”

If you’ve been injured in an motorcycle accident, it’s time to contact a trusted Littleton Motorcycle Accident Attorney at Bahr, Kreidle & Flicker. Since 1983, our attorneys have been fighting on behalf of motorcyclists and aggressively standing up for their justice.

Our lawyers know how serious and devastating the impacts of a motorcycle accident can be, and we know that many injured people depend on settlements to get the medical treatments they required. That’s why we are committed to advocating injured motorcyclists’ rights while working diligently to help them maximize their financial recoveries.

Call for a free, introductory appointment today at (303) 562-1507 or email us using the contact form on this page.

2“Everything You Ever Wanted to Know About Motorcycle Safety Gear” published in Indefinitely Wild, July 2014.