Nothing can be scarier than seeing a vehicle driving the wrong way coming straight at you. That’s exactly what happened on Monday, August 22 when a pick-up truck headed the wrong on U.S. 34 hit a sedan head on killing two people.

There are several reasons vehicles can get headed the wrong way down thoroughfares, but most of the time it seems it’s all for the wrong reasons.

Details and Allegation Concerning the Fatal Car Accident on U.S. 34 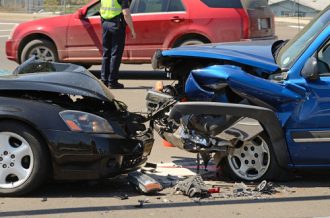 The following details and allegations surround the fatal car/truck accident on U.S. 34 were collected from police documents and new reports:1

The Dangers of Wrong-Way Driving – The Facts and Stats

Collisions involving vehicles traveling in the opposite direction at high rates of speed is one of the deadliest forms of crashes, according to a special report by the National Transportation Safety Board. The following facts and information were gathered from the NTSB’s Highway Special Investigation Report:

Have you been injured in an accident involving a vehicle driving the wrong-way? If so, contact a Littleton Car Accident Lawyer at Bahr, Kreidle & Flicker. Since 1983, our car accident attorneys have been aggressively fighting on behalf of injured people who demand justice and seek compensation for their damages.

Our lawyers know how serious and devastating the impacts of a car accident injury can be, and we know that many injured people depend on settlements or awards from the court to get the medical treatments they deserve. That’s why we are committed to advocating injured people’s rights as well as working to maximize their financial recoveries.

For more information about how our legal services can best serve you, call us at (303) 794-7422 or email us using the contact form on this page.

1“2 die in head-on crash east of Loveland” published in the Reporter Herald, August 2016.