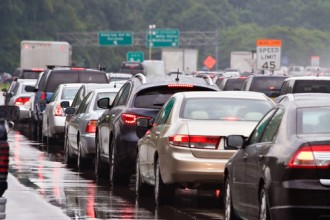 Traffic is a necessary evil for many commuters, especially those who hit the roads during rush hour in bigger cities across the U.S. And while sitting in traffic may be frustrating and draining, it is also incredibly costly – particularly when aggregating the losses of all drivers over the course of a year.

That’s what researchers at the American Highway Users Alliance (AHUA) recently did, focusing on how traffic across the nation costs Americans in terms of time, fuel and lost productivity while also pinpointing some of worst traffic bottlenecks in the nation. And here’s what they found…

While there have been various proposals for how traffic through these bottlenecks could be mitigated, these researchers have strongly recommended developing roads and better infrastructures around the bottlenecks to ease traffic flow (rather than expanding mass transit systems).

What do you think about these findings and researchers’ recommendations? Sound off on our Facebook & Google+ pages.

If you have been hurt in a traffic crash, contact a Littleton car accident lawyer at Bahr, Kreidle & Flicker to find out more about your options for financial recovery

Our lawyers know how serious and devastating the impacts of personal injuries can be, and we know that many injured people depend on settlements to get the medical treatments they need. That’s why we are committed to vigorously advocating injured people’s rights and helping them maximize their financial recoveries.